Golf Scramble Rules: How to Plan a Scramble Tournament 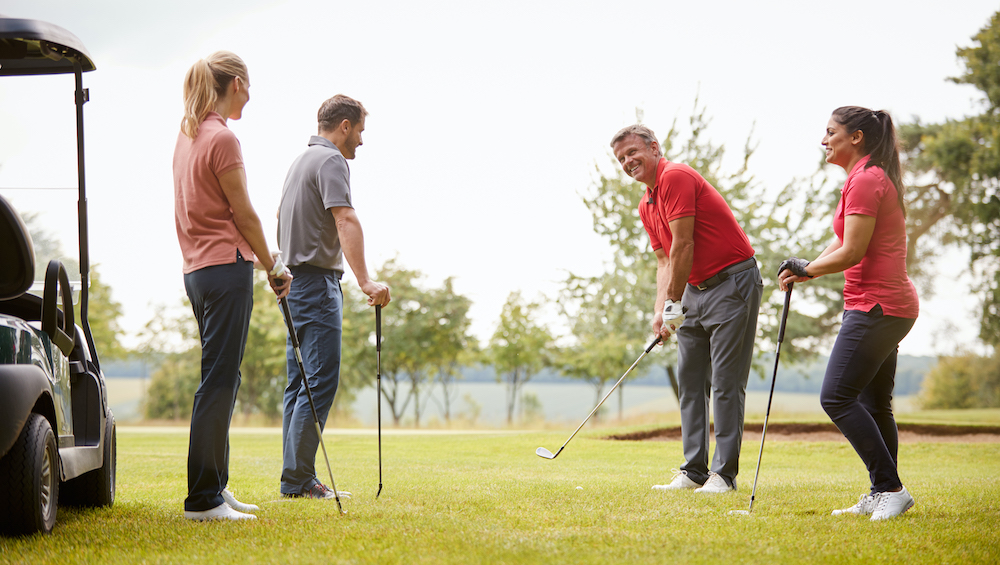 Scrambles top the chart as golf’s most used format for tournaments, especially charity events and other fundraisers. The team format of a scramble allows for lower scores, quicker rounds, and team spirit not found in the stroke play format. Golfers enjoy playing shots from parts of the course they rarely see in a regular round.

What is a Scramble?

A scramble allows teammates to play the course in a best ball format. Scrambles usually have teams of two to four players, although one-player scrambles do occur. Most tournaments at Verandah Golf Club use three and four-player scrambles. While scrambles occur outside of tournaments, most golfers only play them during organized events.

The team members all hit from the same spot on each shot, with the team selecting the best ball for their next shot. This continues until completion of the hole. This format generally eliminates the need to take penalty shots or hit from the woods or bunkers as one team member usually puts the ball in a good position.

No limit exists on the number of players on a scramble team. For quicker rounds and higher participation, most scrambles use three and four-player teams.

A three-player scramble allows three players on each team. Typically, two teams will play together in the tournament, providing friendly competition, and perhaps a little trash-talking, during the round.

A four-player scramble allows four players on each team. Four-player teams usually play the round without another team beside them. With each player playing from the same spot, the rounds typically finish more quickly than they would if the four players played stroke play format.

Occasionally, scrambles require players of different abilities on each team. For example, some organizers mandate that teams consist of a low handicapper, two medium-range handicappers, and a high handicapper. In these formats, the rules often require the team to play a minimum number of the high handicapper’s drives or other shots.

What Are The Rules For A Scramble?

The Rules of Golf from the United States Golf Association do not discuss scrambles. Those rules concern themselves with stroke play and match play. Scrambles generally follow USGA rules for hazards, bunkers, and other similar regulations on the course. However, many times the organizer of the event makes their own rules to provide an enjoyable outing.

Common rules in scrambles include the following:

Event organizers often incorporate their own rules. Many sell mulligans before the round. Mulligans let a player take an additional shot from the same spot if the team decides that, given the less than optimal results of all of their shots, another swing provides a strong chance at a lower score on the hole. In many cases, teams use mulligans on putts.

The composition of the team dramatically impacts the ability to win. It generally helps to have an accurate player, a big bomber, and a good putter. If you can find all three in one player, even better! Having different types of players enhances your chances of going low. Having several superb putters on the team also significantly helps the team’s odds of winning.

Once you have your team, you need to consider the order in which the team plays shots. Generally, from the tee or fairway, your most accurate player should play first. If the accurate player hits a good shot it allows the other players to make more aggressive swings.

From the tee, your longest hitter should go last. If one of the other members of the team finds the fairway, the long hitter can take a pressure-free swing to try to blast the ball down the fairway.

If the accurate player hits a good shot from the fairway, the others can take chances. On a par 5, they can try to reach the green in two. On a par four, they can attempt more aggressive lines to the pin. Without the pressure to hit a good shot to save the team, players will often hit amazing shots.

On the green, players are usually allowed to stand behind one another when they putt. The second best putter should always putt first. This allows the other players to observe the line of the putt. Seeing the line of the putt improves each of the following player's chances to hole out. The best putter should go last, allowing them to see multiple putts and providing a high possibility of knocking the ball in the hole. Players with the biggest need for putting tips should be sandwiched in the middle. This allows your weakest putters a chance at a low-risk shot.

The judicious use of mulligans also helps. Rarely should you waste a mulligan on a 30-foot putt or on a tee shot. Shorter putts, wedge shots, and chips provide the best return on investment for mulligans. Make sure that you use all of your mulligans. If you arrive at 18 with several mulligans in your pocket, you won the tournament or did not take enough chances.

Remember that the shot closest to the hole may not represent the best play. Factors such as lie in the fairway or break on the green may dictate that the team plays a different ball. Always play the ball allowing for the best chance of success on the next shot.

Tips for Organizing a Scramble Round

While scrambles frequently occur in tournaments, nothing prevents you from organizing an informal round. You have to set up the scramble remembering that most courses restrict groups to five players or less. For larger groups, you may need to contact the course and organize your own tournament.

A two-man scramble would allow two teams to play together in the same group. Before the round, you should decide whether you want to give each team mulligans and whether you want other special rules.

If you prefer a three or four-man scramble, you will need multiple tee times. Each group would play on their own with a comparison of scorecards determining the day’s winner. Teams should understand any special rules before the start of the round.

While most golfers prefer stroke play rounds for non-tournament play, most will quickly agree to the occasional scramble. The different format and the various shots it requires offer a welcome diversion to the standard round.

Scrambles bring the players together to figure out the best way to play each hole. This often leads to low scores and high-fives. If you need some variety in your golfing routine, try entering a scramble or organizing your own. You will enjoy seeing a different side of golf, and, hopefully, a different side of par!